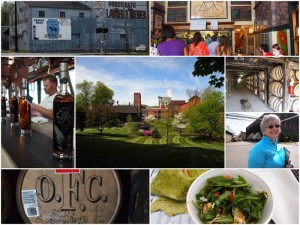 Kentucky is not only home to horses and bourbon,  but for the last three years it has been home to my sister Jordan while she attended law school in Lexington. Last weekend I had the opportunity to visit her there one last time for her graduation. In addition to spending time with friends and family celebrating the occasion I also had a chance to sample some of the local delicacies.

James and I are bourbon drinkers, and in previous visits to Kentucky I have trekked out to Woodford Reserve which occupies an idyllic piece of land right in the heart of horse country (suspiciously idyllic according to the owner of Garrison Brothers who claims that Woodford lets Old Forester do their distilling). On this trip our family toured Buffalo Trace – a real working distillery which is evident by the strong odor of corn mash in the air and the hundreds of compact warehouses on the property. Bourbon distillation has taken place at this location in Kentucky for the last 200 years, including a “medicinal” trade during prohibition. In its history, the property’s stills and warehouses have passed through a number of hands and are currently in the possession of the Sazerac Company – a brand with its own proud history and New Orleans roots.  Today Buffalo Trace makes  many of the best regarded bourbons in America, including Pappy Van Winkle and Stagg. While the price tag on those brands is a little high for my taste, Buffalo Trace also makes the more affordable Eagle Rare (my personal favorite), Buffalo Trace, Blanton, and about a dozen other labels.

While this trip’s bourbon tasting started at Buffalo Trace, it did not end there. Jordan’s graduation coincided with the derby weekend! The derby, often called the most exciting two minutes of sports, takes place in Louisville, but it may as well be an official holiday for the whole state. We attended a viewing party at Keeneland for a day of races, socializing, snacks, and more bourbon! The food was surprisingly vegetarian friendly with a variety of salads, fresh fruit, and pasta. Makers Mark is one of Keeneland’s sponsors and the drink menu was limited to: 1) Mint Julep, 2) Keeneland Breeze, or 3) straight bourbon. There were few complaints.

After all the festivities on derby Saturday, the focus shifted to more healthful foods on Sunday. Jordan swears by Sarah Mediterranean Grill which she says is the best Middle Eastern food she has had since deploying to Iraq. Having never been to the Middle East I have no basis for comparison, but the Mujadara, cucumber salad, and flat bread are something I would go out of my way for next time I am in central Kentucky.  I also really enjoyed the simple, seasonal, and tasty Triple Crown Salad at the Courtyard Deli in downtown Lexington.

Gastronomically speaking, I always leave Kentucky satisfied but knowing that there is so much more to explore. Some day I would love to take in the whole Bourbon trail, try the fine dining joints in Louisville, and grill out over a camp fire near the Cumberland Gap. This trip I left very happy with all that I had the chance to experience with my family, looking forward to the next opportunity to visit the Bluegrass State, and very proud of my sister as embarks on her career as an attorney!