Shishito peppers are a Japanese variety of small chilis.  Though generally not spicy, every once in a while you might get one that has a touch of heat to it.  Shishito peppers have somewhat thin flesh and very thin skin, and their taste has a delicate bitterness to it.  In Austin, you can get wonderful shishito peppers from Johnson’s Backyard Garden during the late spring/early summer.  Try this super simple recipe as an appetizer or quick snack! 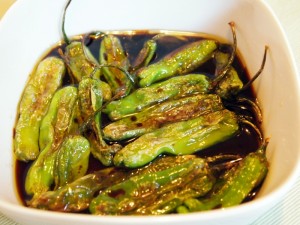 Variation:  Instead of using the marinade, you can just remove the blistered peppers to a small serving dish and sprinkle with coarse salt.