In my opinion, all peppers taste better if they have been roasted. Roasting adds depth to the flavor of mild or sweet peppers and it helps mellow the heat in spicy peppers. 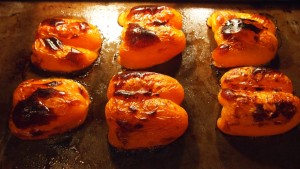 Tip: You can roast a variety of different peppers at the same time, but keep an eye on the smaller ones. They may blacken faster and need to be removed from the oven sooner. You want the skins to char, not the flesh!