Muhammara is a delectable dip, typically made with roasted aleppo peppers, walnuts, and lemon juice. Being in Texas, however, we mixed things up a bit and used sweet Carmen peppers (from Johnson’s Backyard Garden), pecans, and key lime juice.  The result is amazing!  Note that this recipe calls for pomegranate molasses, which really are a key ingredient.  Look for them at your local Mediterranean grocer (such as Phoenicia in Austin) or in the international food aisle of your grocery store.  You could also use reduced balsamic vinegar as a substitute.  If you can’t find Carmen peppers, use 2 to 3 large red bell peppers in their place. 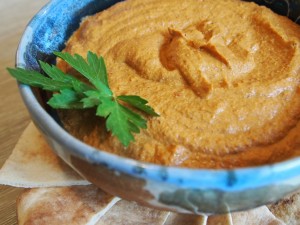